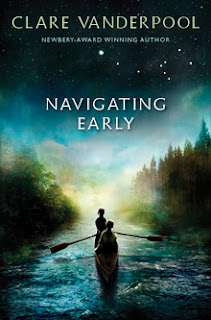 In 2011 Clare Vanderpool surprised most of us who Look for Newbery every year.  Her novel Moon Over Manifest sort of came out of no where to win the medal.  None of the students in our Newbery Club at school had read it because I hadn't included it on any of our watch lists for them to read.  I liked the book, but Clare Vanderpool's second book, Navigating Early, is even better in my opinion.

Set just after WWII Jack Baker is uprooted from his Kansas home after the passing of his mother.  His father, a captain in the Navy, returns home after 4 years at sea in the U.S. Navy and changes everything.  The biggest change is moving Jack to a boarding school in Maine.  Jack is put into a place where he has nothing in common with the other boys.  The students at Morton Hill Academy are not mean to Jack, but when you move in after all the groups and friendships have been formed, and you have very little in common with anyone, it's tough to fit in.

On his first day at Morton Hill, Jack observes Early Auden filling sand bags by the shore as if he is trying to hold back the ocean.  As the story progresses Jack always refers to Early as "the strangest of boys" but they become friends even though Early has some very special abilities.

When a math teacher goes into a theoretical speech about the numbers of pi ending, Early walks out of class, clearly frustrated.  Later when Jack finds him in his workshop room he learns that Early has a clear interest in the number pi and sees a story in the numbers.  He begins to tell Jack the story of Pi, a navigator on a quest.  Jack also learns the big secret about Early, he is the brother of The Fish, a Morton Hill legend and that fact makes the other boys uncomfortable.

Jack and Early come together through conversations about Pi, the music that Early enjoys listening to, and rowing.  Together they work to make Jack a better rower and even build a boat.  Through it all Jack is fascinated by this strangest of boys and reluctantly becomes his friend.

During a week long break Early plans to go on a quest to find Pi, his lost brother, and a 700 pound bear that is threatening hikers on the Appalachian Trail.  When circumstances prevent Jack from spending the week with his father, he joins Early on his quest.  The author alternates between the boys' quest and the adventures of the navigator Pi.  The two mirror each other and Early is sure they will find all of the things he set out to look for because Pi did.

The set up for the quest is beautifully written giving the reader insight into all of the characters and why they do what they do.  When the boys set out on the quest, the writing becomes exciting and suspenseful with the reader wondering what will happen around the next bend in the trail.  Clare Vanderpool mixes in just enough of Pi's story to remind us where we are going and what we have to look forward to.  The ending part of the book brings it all together allowing all of the characters to discover what it is they needed to discover in order to be happy and have their lives return to order.

I like this book a lot.  I think it will be difficult for a lot of readers and will be recommending it to my best 5th grader readers.  I've been looking for our first Grand Discussion book of the year and I may have just found it.
Posted by Bill at 9:14 AM