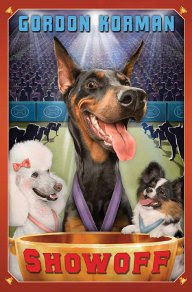 ver the years these reviews have received a lot of attention so I figured why not, I'll review the latest installment in the series, Showoff.

Luthor the guard dog is the featured character in this episode. Griffin is spending six weeks with his friend Ben while Mr. and Mrs. Bing are in Europe trying to sell Mr. Bing's inventions. The one rule in place is "No Plans!" Of course Griffin agrees, but when the kids go to the mall to see a grand champion show dog trouble starts.

Samantha the animal lover takes Luthor the doberman and he uncharacteristically charges the stage and injures the champion pooch. Samantha's family is sued by the owner and Luthor is dropped off at the pound. That doesn't sit well with Griffin so he bails Luthor out and sets his plan, Operation Doggie Rehab, into motion.

Griffin intends to turn Luthor into a grand champion show dog to raise the money to pay the lawsuit to help Samantha get her dog back to keep. As usual parts of the plan work, parts don't and Griffin and Ben get mixed up with some interesting characters, most notably world famous dog trainer Dmitri Trebezhov who has dropped out of the dog game to protest the treatment of the show dogs.

The chapters on Dmitri's training techniques were some of my favorites and had me laughing out loud in spots. I think kids are really going to enjoy them too. This installment of the Swindle series doesn't have quite as much action as the other three, and the team doesn't get totally engaged until close to the end, but it's still fun. Gordon Korman has a way in all of his books of drawing the reader in and keeping them. Whether it's the action, or the characters or the plot twists, he writes books that kids love to read.

I have a feeling that Showoff will be flying off of the book fair shelves.
Posted by Bill at 6:24 PM