Looking for Newbery - The Aviary 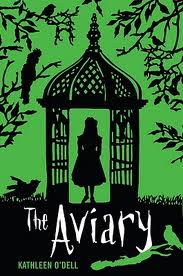 The Aviary by Kathleen O'Dell is an interesting book. Part historical fiction, part mystery it is full of twist and turns that keep the reader guessing and guessing and guessing. I didn't figure it out until the very end and then I'm still not sure I've figured it out!

First there's the Glendoveer Mansion, the family home of a world renown magician whose family perished in a boat crash under mysterious circumstances. The mansion becomes a character in the story with its mysterious rooms and sounds and artifacts. It's the perfect setting for this suspenseful story.

Then there's Clara, the house keeper's daughter. She's a curious girl, but her overprotective mother won't let her leave the house. She looks longingly out the windows when the drapes aren't drawn and wishes she was walking to school with the other neighborhood kids. She believes she suffers from a rare heart disease that makes it to dangerous for her to mingle with the outside world. Clara only knows the Glendoveer Mansion and it's last inhabitant, Mrs. Glendoveer.

Mrs. Glendoveer is the sickly, aged widow of the world renown magician. When she passes away, Clara's only friend is taken away...or is she? Clara still feels her presence and is convinced that there is something she must do so Mrs. Glendoveer can finally rest.

Add, the birds. The birds in the aviary in the backyard. Each a different species, each with a different personality, each with what appear to be very human characteristics. Clara is afraid of the birds, but has promised Mrs. Glendoveer that they will be taken care of after her death. Clara fulfills her promise and begins to notice that the birds are more human than they should be, one of them even speaking.

Begin the investigation. Clara starts to look into things, finding some of the mysterious mansion rooms, sensing the presence of Mrs. Glendoveer and realizing the secret lies with the birds. She befriends one of the school children by waving out an open window and has a partner to help with the investigation since she still isn't allowed to leave the house.

Everything is answered in the end, and the end is satisfying. There are a lot of characters all adding their own piece to the puzzle in interesting and entertaining ways. Although it wasn't a quick easy read, a lot to think about and process, I liked the book. I was a bit afraid that it might be a little long in some places for kids to get into, but several of the Newbery Club members read and liked the book. The writing is certainly well done and the feel Kathleen O'Dell creates with her words definitely works in this mysterious story.
Posted by Bill at 6:04 AM