Looking for Newbery - The Wonderstruck Conundrum 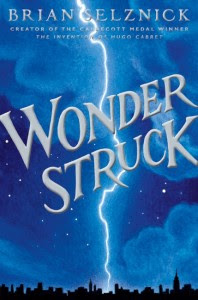 Is it Newbery? Caldecott? Graphic Novel? None of the above?

Whatever category you put it in, it's good. Selznick has a way of weaving stories and pictures together like nobody else right now. In Wonderstruck the stories of Ben and Rose start out separate, but knowing how Brian Selznick works, the reader knows at some point they will come together.

Ben is a partially deaf boy living in Minnesota in 1977. He doesn't know his father, but lives a happy life with his mother and her family in a tiny fishing cabin. When his mother dies suddenly, Ben begins to wonder about the family he never knew. While loo

king around the cabin he finds a book with a mysterious inscription and decides it's a clue that he must follow to New York City to find his past.

Rose is a girl, practically a prisoner in her own home, in 1927 Hoboken, New Jersey escapes to New York City following an actress she idolizes.

Both children find the answers they are looking for and more in the city and when the pictures and text come together they find each other. It really is a fairly simple story but in the hands of Brian Selznick it twists and turns through adventures involving amazing characters that change the story every time they enter and leave.

Hugo Cabret is still a popular book in the library and when I brought out Wonderstruck, the reserve list grew and grew and grew. We are still working our way through it and kids are still adding their names to the end of it. The books are magical and draw kids in, all kids, regardless of reading level get the books and read them again and again.

Brian Selznick has done it again!
Posted by Bill at 8:09 AM