Looking for Newbery - Small as an Elephant 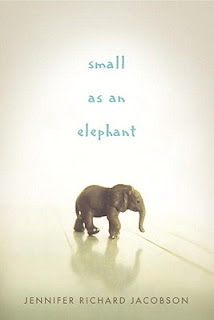 Every year it seems that there is at least one amazing book that, because of its release date, gets lost in the Newbery shuffle. I read Small as an Elephant by Jennifer Richard Jacobson back in March and marked it Newbery Watch in my journal, then I sort of forgot about it. As I began looking at other watch lists the title popped back up again and I remembered that it was indeed a 2011 title. I hope the Newbery judges have a better memory than I do!

Small as an Elephant starts in a campground on an island off the coast of Maine. Eleven year old Jack Martel comes out of the tent he share with his mom only to find his mom gone. He then sets out an adventure to find his way home, or at least to someplace safe. Jack is torn throughout his journey about how much he should reveal about himself. Author Jennifer Richard Jacobson does an outstanding job of keeping the reader wondering what the full story is too.

I remember wondering what kind of parent just leaves their 11 year old in the middle of a campground without any information about their whereabouts. I remember wondering if she had just run to get more supplies and would be back soon. I remember feeling angry, just like Jack, when I realized she wasn't coming back. I remember wanting Jack to tell someone safe about his predicament and I remember understanding why he didn't in order to protect his mom.

I remember a lot about this book 10 months after reading it and I think that speaks to the power of the writing. Slowly the facts of Jack's life are revealed, his love of elephants, his mother's mental illness and his fight to protect her so he can stay with her. Jennifer Richard Jacobson uses a string of characters along Jack's journey to reveal of the important facts about his story.

Recently we had a preliminary vote at our student Newbery Club, and Small as an Elephant made it to number one on several of the lists. Here's hoping it makes it to the top of some of the Newbery judges' lists too.
Posted by Bill at 10:05 AM

Email ThisBlogThis!Share to TwitterShare to FacebookShare to Pinterest
Labels: looking for newbery, small as an elephant.