The Fast and the Furriest Meaningful Fun 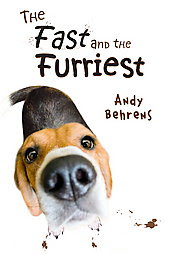 Once again while looking at the new fiction table at the library, I couldn't resist the cover of this one. Just look at that dog's face! The Fast and the Furriest by Andy Behrens will be very popular with my fourth and fifth grade students, because most of them are suckers for a good dog story, especially a dog story where there are no dead dogs! Sorry if I just spoiled the ending.

The main character, Kevin Pugh is an overweight, video game playing, TV watching, junk food eating, couch potato. His family refers to the basement as his office and doesn't really notice when he comes out to do something active. He isn't interested in any sort of sport or physical activity like the rest of his family.

Kevin's dog Cromwell is just about as bad, always laying around sleeping in a lump. Cromwell doesn't enjoy exercise or physical activity, just like his master Kevin. However, it is Cromwell that gets Kevin off the couch and into the active lifestyle of dog agility, dogs running on an obstacle course.

Kevin's sister Izzy, 10 year old soccer phenom and the star of the Pugh family. The parents spend all of their time supporting Izzy's soccer and she is focused and determined to be the best. Izzy is the only one who notices a change in Kevin and even tries to support his new interest.

Howie Pugh, Kevin's dad and former Chicago Bears linebacker. He is a local fan favorite and always in demand for card shows and sports talk show interviews. Howie has dreams of football greatness for Kevin, even though Kevin has expressed no interest in athletics at all. Howie isn't supportive of the dog agility idea and refuses to pay for training because in his view if it doesn't use a ball or involve contact, it isn't a sport.

Zach, Kevin's best friend and the man with the money. When Kevin's family won't pay for the agility training, Zach reveals the fact that he has a huge sum of money in the bank and is willing to pay for Kevin and Cromwell's training. Zach is extremely enthusiastic in his support for Team Cromwell as he calls them and sometimes unnerves Kevin with his pep talks.

Elka, the agility trainer and almost mystic dog whisperer at Paw Patch the local facility to learn how to compete in dog agility competitions. While all of her communication goes through Cromwell, the dog, she also reaches Kevin and helps him get off the couch and in shape. Something his family has really given up on.

Kevin is spurred on by Cromwell who sees a late night television show with dogs running agility courses. Cromwell is hooked and begins practicing in the back yard. Andy Behrens uses great humor to describe the chubby dog trying to leap through the tire swing and getting hung up on his belly half way through. The story continues with Kevin's father refusing to support the agility training unless Kevin shows some dedication to something like football camp for an extended period of time. Kevin reluctantly agrees and is the victim of the star athlete bully at the camp which leads to him leaving the camp.

His best friend Zach offers to pay the $200 entry fee for agility training, partly for Kevin but mostly for Cromwell. The dog takes to it like a superstar and the mystic trainer Elka convinces Kevin, through the dog, that he has to work as hard as Cromwell so they can both be successful.

In the end, Kevin experiences success for the first time in his life and finds something he loves to do. It leads to weight loss, physical fitness and self confidence. Finally his family notices and his dad is forced to accept that dog agility is a sport and his son is very good at it.

The Fast and the Furriest is a funny story with lots of underlying messages about finding what you love and sticking with it, regardless of what others think, being honest with your family, friendship, and perseverance. I'm sure this one won't be staying on the shelves very long.
Posted by Bill at 7:30 PM