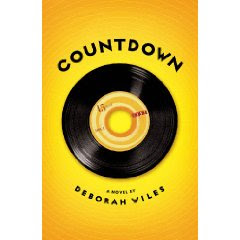 I'm a big fan of Deborah Wiles. Each Little Bird That Sings was a huge hit at a Grand Discussion, and the other two books from the trilogy, Love, Ruby Lavender and The Aurora County All-Stars make my list of favorites. I am constantly recommending them to kids in the library and usually get a very positive response when they are finished.

When I read on Goodreads that Franki had Countdown, a new novel by Deborah Wiles, on her "to be read" shelf, I immediately emailed her to get the details. Since it's not released yet, we were able to score a copy from Sally at Cover to Cover. Franki got her hands on it first and reviewed it here.

It's the beginning of a sixties trilogy and it is awesome! The story revolves around the time of the Cuban Missile Crisis in 1962. The main character, Franny lives just outside Washington, D.C. and her father is part of the Air Force stationed at Andrews Air Force base as an officer. She is struggling to make friends in her new school, dealing with an uncle who suffers from some mental health issues, trying to figure out what is going on with her college age sisters who has some new "thinking" friends, and worrying that the U.S.S.R. will drop the bomb on them at any time. There are so many plot lines and stories in this book that every kid who reads it will focus on a different one, and they are all good.

Deborah Wiles not only wrote an excellent story in Countdown, but she infused it with informational interludes that completely set the tone for the book. Between chapters there are advertisements for build it yourself bomb shelters, lyrics from popular songs, photos of President Kennedy and Nikita Krushchev, quotes from important world leaders and common people, along with comics and all sorts of pop culture things from 1962. These breaks in the story keep the reader in 1962 so they are totally immersed in the story of Franny and her family.

Deborah Wiles also builds the tension throughout by slipping quotes from the Duck and Cover movies that were shown in schools during this time. Every time I came across one of these:
Yes, we must all get ready now,
in case the atomic bomb
ever explodes near us.
If you do not know what to do,
ask your teacher when this film is over.

As the missile crisis reaches it peak, these excerpts from the movies come more frequently, which just helps the reader get a feel for what these kids were going through. The whole crisis played out in their classrooms and homes.

I love this book, it will be tough to recommend in the elementary school, it will take a pretty sophisticated reader to really get it and appreciate what Deborah Wiles has created, but I would definitely get into the hands of middle school readers. Franki mentions using it as a read aloud, and it would be good for that, my only concern is the visual aspect of the time period interludes. I would really want the kids to be able to see the pictures to give them a better sense of the time period.

It may be really early, but I think this book has Newbery potential all over it!