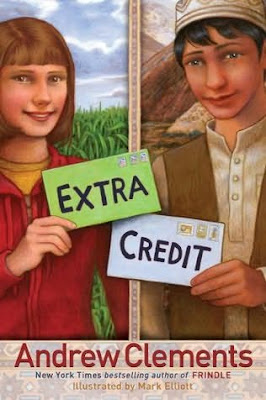 Andrew Clements is very popular in the library, his books don't stay on the shelves and teachers love to use them in class. The fact that he writes about kids and issues that kids can relate to, make him a favorite. I was excited when I went to the library and found a new novel by the king of the kid sized dilemma.

Extra Credit deals with a struggling sixth grade student Abby Carson. Actually Abby is beyond struggling, she is about to be held back due to her lack of interest in her school work. Abby loves the outdoors and has taken a real interest in rock climbing thanks to the wall in her school's gym. After receiving a warning letter from the guidance counselor Abby talks with her parents who feel as if they have failed by not paying enough attention to her school work and also a little angry that Abby promised to do better after her last grade card, but didn't hold up her end of the bargain. Abby informs them that she has a plan to talk with her teachers to see if there is anything she can do to avoid being held back. Her parents commit themselves to making sure homework is done first before Abby is allowed to explore the woods on the farm where they live.

Abby's teachers present a deal, Abby must complete all homework on time, earn at least B's on all tests, and complete an extra credit project assigned by her language arts and social studies teachers. Abby chooses a project that includes writing a pen pal in Afghanistan and creating a bulletin board to share the letters with her classmates.

Bring on Sadeed, a bright Afghan boy about the same age as Abby. When Abby's first letter arrives the village leaders meet with the teacher to choose a student to become the pen pal. Sadeed is the obvious choice because of his abilities in English but culturally it would be inappropriate for a boy to have correspondence with a girl in America. It is decided that Sadeed will help his younger sister with the English so the letters will come from her. As they begin to write the first letter Sadeed realizes that his sister is not really up to the task and begins to put more of himself into the letters, eventually, he sends two, one from his sister and one from him.

This is where Andrew Clements is at his best, creating the dilemma! Abby has the dilemma of whether to share Sadeed's letter since he asked her not to and because it is more personal than the letter from his sister. Sadeed has the dilemma of how to cover the fact that he is writing letters to an American girl against the wishes of the village leaders.

Andrew Clements is great at bringing the cultural differences to a level that will be understood by kids. He gives detail of life in Afghanistan in a manner that is descriptive and real. As always, he writes a story in such a way that will keep the kids turning pages at a reading level that is good for many ages, grades 3 through 5. Once again, Clements has provided an accessible, enjoyable novel for kids.
Posted by Bill at 1:43 PM