Escape Under the Forever Sky is an Exciting Adventure 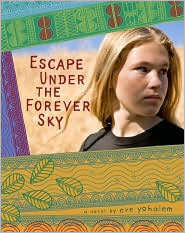 Hatchet by Gary Paulsen has always been a favorite of my students and me. The excitement of Brian surviving in the Canadian wilderness with only what he finds on the crashed airplane and in the forest around him is a real page turner. As I read Escape Under the Forever Sky by Eve Yohalem, I couldn't help but think about the similarities in the two stories.

In Escape Under the Forever Sky, Lucy Hoffman, daughter of the U.S. Ambassador to Ethiopia, feels cooped up. Her parents' jobs have taken her to many exciting places around the world, and she has experienced more in her 13 years than most do in a life time. However, as the daughter of a U.S. government official in a hostile country, her mother keeps her sheltered from the beauty and adventure that live outside the cement walls and barbed wire fences around the American compound.

Lucy is determined to see Ethiopia in all of its natural glory so she schemes with two friends from the International School she attends. The three of them have had brushes with some unfriendly townsfolk during their adventures, which only makes Lucy's mom tighten the security around her. Both of Lucy's friends are native Ethiopians and don't understand the danger that their outings cause for her. On a trip to the market place, Lucy is kidnapped and taken hostage by two men, one of them the driver for one of her friends. Lucy is taken to a remote location and locked in a makeshift shack until the demands are met.

Things don't work out quite the way the kidnappers hoped, and Lucy is left with no choice but to escape into the Ethiopian wild surrounded by wild animals and a few unfriendly people. Lucy encounters hyenas, warthogs, and thirst. At one point the kidnappers catch up to her and the only thing between Lucy and them is a group of lions. This was the inspiration for the story, it's all based on a 12 year old girl who escaped her kidnappers and was protected by a group of three wild lions. The tension of this portion of the story is real, and Eve Yohalem builds it and brings the reader right to the watering hole with Lucy. I simply could not stop reading until I had resolved it. Just incredible! Lucy also encounters a native tribe during a festival and is invited to participate. Once again, the writing is awesome! Obviously the author has done her research because the detail of the ukuli bula the leaping over the bulls festival puts the reader in the middle of the village, as the boys run across to prove they are ready for marriage. Well done!

Escape Under the Forever Sky is more than Hatchet with a female character, it's a look at life in the wilds of Ethiopia. It's descriptive and exciting and a real page turner. I'll be recommending this to the 5th graders, especially those that love Gary Paulsen's saga of Brian.

Watch the cool trailer here.
Posted by Bill at 8:30 PM