If you've read Literate Lives much, you know that we are big Gordon Korman fans.  One of my first book reviews was about Swindle, the first in the series.  I have since reviewed other titles in the series including Zoobreak and Showoff.  I love them all, but the new one, Jackpot, may be my favorite.

Gordon Korman has created a fantastic cast of characters for the books led by Griffin Bing, the man with the plan.  In each book the kids are out to right a wrong or solve a problem.  In all of them the group has followed Griffin's plan without question, even when they knew it might get them into trouble. 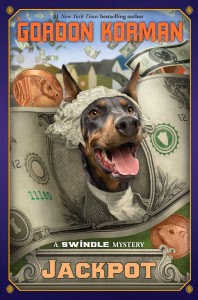 In Jackpot, Korman changes things up a bit.  The gang follows Bing in a plan to get even with their arch nemesis and bully, Darren Vader.  They set him up to look all over town for a missing $30,000,000 winning lottery ticket.  Vader begins digging through trash dumpsters and event he town dump.  The group of friends wants to pull the plug on the operation thinking it's too harsh even for Darren, but Griffin resists and the plot continues.  When the whole thing escalates and tourists from all over begin dumping trash in the streets looking for the ticket, the plan is revealed and the kids end up with community service, cleaning up all of the trash.

Enter Victor Phoenix, the new kid who just moved in.  At an assembly about bullying, brought on by the prank Griffin pulled on Vader, Griffin is singled out as a bully and Victor doesn't like that.  He begins to move in on The Man With the Plan and Griffin doesn't like it.  The entire gang turns against him and Griffin Bing is lured into helping Darren Vader, his enemy, to come up with a plan to find the ticket.  Unbeknownst to him, his old gang, now led by Victor Phoenix begin working on the same plan.  It all leads to a lesson learned by Griffin that he needs help to carry out his plans and will need to include his friends in the decision making more if he wants to keep his reputation as THE man with a plan.

Once again, Gordon Korman takes the reader on and adventure that they can't put down.  Just when you think you have it figured out, there is a new twist that surprises the reader and changes the story.  My opinion of Griffin Bing went back and forth throughout the book, liking him and not liking him, sympathizing with him and then with Darren.  Kids are going to love this latest addition to the series and I'm pretty sure it will be flying off the book fair shelves.
Posted by Bill at 9:35 AM