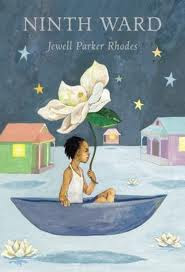 I have posted about two Katrina survivor picture books, A Place Where Hurricanes Happen by Renee Watson and The Two Bobbies by Kirby Larson, both very well done books. I'm also excited to announce that Kirby Larson will be visiting Bailey for two days in March, she's done some of my absolute favorites, so I can't wait.

Recently as I browsed the Newbery watch lists, preparing for our Bailey Newbery Club and for the Looking for Newbery series at Literate Lives, I ran across a title, Ninth Ward by Jewell Parker Rhodes. It wasn't one I had seen before, so I was intrigued. My friend Maria managed to get her hands on a copy so I borrowed it and read it in between baking cookies this weekend. I liked it a lot!

The main character, Lanesha, an illegitimate child, scorned by her well to do grandparents, lives with the mid-wife, Mama Ya-Ya, who helped birth her. Unfortunately, Lanesha's mother died during child birth and there was no place else for her to go. Lanesha is able to see ghosts, and while she hasn't communicated with many of them, she is very aware of them. This gift, as Mama Ya-Ya calls it causes Lanesha to be an outcast in her school, kids sometimes make fun, but mostly they are afraid of her.

Mama Ya-Ya is a healer, a mid-wife, a believer in "black magic" and spirits based on beliefs held by the slaves from another time. Some may read this and struggle with this theme, but it's necessary to the story, it helps create the mood by revealing a culture that exists in New Orleans and a part of the character. You won't find to many more loving, caring people than Mama Ya-Ya who uses her beliefs and powers to care for Lanesha when no one else will. She begins to have visions, dreams of something bad happening as the hurricane moves closer. Her dreams tell her the hurricane is bad but all will be fine in the end. There's something else that she sees that she won't reveal to Lanesha, it's up to the 12 year old to figure it out on her own.

As the storm moves closer, Lanesha befriends another outcast, TaShon. A boy born premature with a disfigured hand and small stature. He is the target of every bully in school until Lanesha sticks up for him and a strong friendship is formed. The friendship is crucial to the survival of Katrina. As the storm grows closer and stronger, TaShon and his parents head for the Super Dome, which as we all know, was the site of some horrible things during the tragedy.

Author Jewell Parker Rhodes does an amazing job of building the suspense of the storm. It made it difficult to get my cookies finished because I didn't want to put it down. The reader is taken into the home of Mama Ya-Ya and Lanesha as Katrina approaches. We are there when Lanesha decides that survival is up to her. We are there as the neighbors party until the last second, ignoring the mayor's call to evacuate either because they don't believe him, or because they don't have a way out. We are there as Lanesha plans to ride out the storm, boarding up windows, cooking chicken, red beans and rice, icing coolers and moving everything up to the second floor of the house. Lanesha and Mama Ya-Ya ride out the storm together and come out the other side. TaShon, separated from his parents in the Super Dome comes home and joins them on the second floor.

As we all know, it was after the storm when the worst of the tragedy struck, the levees breaking and the Mississippi pouring into the Ninth Ward. We all saw the pictures of the tragedy that struck the city of New Orleans, Jewell Parker Rhodes spares nothing in her description of the events. I don't want to give anything away, the book needs to be read for that, but I'll just say that it is a story of sadness and hope, a well written survival story.

Other Reviews:
Welcome to my Tweendom
Charlotte's Library
Manga Maniac Cafe
Posted by Bill at 11:11 AM