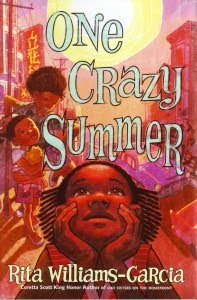 As Karen said in an earlier post, we have signed on for another year of Looking for Newbery here at Literate Lives, and it's time for the fun to begin. Karen and I have been looking at lists and picking the books we need to read and the ones we have already read. At breakfast one morning we came up with a tentative list, but just like all of the Newbery watch lists out there, ours is fluid too.

One Crazy Summer by Rita Williams-Garzia is set in one of the most dramatic years in our country's history, 1968. Three sisters being raised in Brooklyn by their grandmother are suddenly sent to Oakland to visit their mother who walked out on them 7 years before. There father thinks it will be a good experience for them to meet her and spend time with her. Grandma isn't so sure, but off they go, on an adventure that will change them forever.

Fern the youngest, Vonetta the outspoken middle, and Delphine, the oldest and designated caretaker arrive in Oakland and their mother's home. It's clear from the beginning that she doesn't really want them there. She doesn't cook for them, instead gives them money to walk to the nearby Chinese take out place. They are not permitted in the kitchen so they eat the food on the floor. Their first morning their mother puts them out of the house, sending them to the Black Panther People's Center for breakfast and the days activities.

During their daily visits to the People's Center, the girls are exposed to the militant 60s group. Activities include making rally signs and getting local businesses to display flyers for a rally. The girls are instructed in the ways of the Black Panthers. Interesting for me was the fact that in the midst of the indoctrination, the militant group, known for their violent ways, provided a safe place for kids in the neighborhood to hang out during the day. They made sure the folks at the center had breakfast and lunch and provided necessary services for the community. A side of the organization that most of us weren't aware of.

I wish I could say this book had a happy ending, reunion with mom and all that, but at the risk of spoiling something, let me just say it doesn't. The girls get a better idea of who their mom is and why she walked out, they get a lesson in the politics of the day and learn a lot about themselves. I enjoyed the story, I found it informative and fast paced, but I don't think it will make my top 5 for this year's award.

I have talked to several students that have read the book and they enjoyed it. Most were intrigued by the history of the time and it actually spurred their interest in reading more about this time period.
Posted by Bill at 12:05 PM

Email ThisBlogThis!Share to TwitterShare to FacebookShare to Pinterest
Labels: looking for newbery, one crazy summer