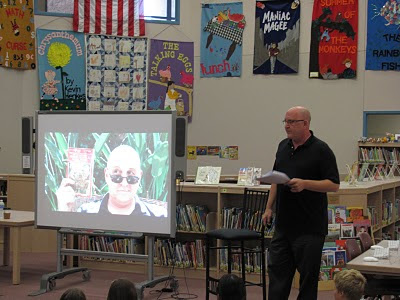 Sally at Cover to Cover has offered me other authors since I move into the library, but this was the first chance I had to take her up on her offer. I reviewed The Magnificent 12 over the summer from an ARC that she gave me, liked it, knew the kids would like it, but as I've said before, fantasy is just not my thing.

Author Michael Grant was starting his publicity tour for the book and on his stop in Columbus they were looking for a couple of schools for him to visit. Franki and I quickly agreed and the wheels were set in motion. First it was decided that he would only speak to fifth graders at my school because the book is really best suited for them. It would also be a special thing for them to enjoy by themselves and since we were only going to have a little over an hour with Michael a small intimate group was best.

Leading up to the visit I showed the awesome trailer at Mag 12, the official website. We sold about 30 books leading up to the event and the kids were excited to meet the author and get his autograph.

Just let me say that Michael Grant did not disappoint. I knew from reading his book that the guy had a great if somewhat warped sense of humor and the kids were laughing throughout his presentation, which, by the way, was unveiled at Bailey for the very first time. It was great for out fifth graders to have an author that was speaking only to readers at their level. It was a new experience to hear a fantasy author tell them that they didn't have to only "write what they know" as they have h 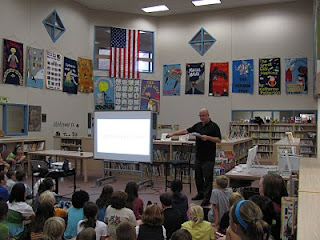 eard so many times from authors. His big thing was WRITE WHAT YOU WANT, JUST WRITE! What a wonderful message. As he signed the books he was engaging with the kids, a real natural and even received a jar of home made jelly from one of the kids, BONUS!

When the kids were gone I got a chance to talk to Michael not only about his books, but his wife, Katherine Applegate's books as well. All in all, it was an enjoyable morning with an interesting author who provided our kids with an experience they will remember!
Posted by Bill at 8:22 PM