Marlane Kennedy's Dog Days of Charlotte Hayes On a Snowday 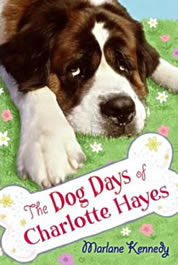 Our district used its 4th snow day today, and I used yesterday, Presidents' Day to read the Dog Days of Charlotte Hayes by Marlane Kennedy. There's really no connection between the two other than the time off has given me lots of opportunity to catch up on my "to be read" pile. I will say that I'm getting a little nervous with all of these days off since we only have one more calamity day left before we have to make them up, and I'm hearing rumors of yet another winter storm on its way. Makes you wonder about the wisdom of cutting our calamity days from 5 to 3 next year and then ZERO the next year. Oh well, enough speechifying, on with the book!

Marlane Kennedy is an Ohio author which already makes her interesting to me, and she wrote one of my favorites, Me an

d the Pumpkin Queen, based on a girl growing up in Circlevilhle, OH, te home of the Pumpkin Show every year. Pumpkin Queen got quite a bit of attention in the year it was written, and I'm still recommending it to kids in the library, it doesn't stay on the shelf very long.

Charlotte Hayes is not a dog person, she makes that very clear from the beginning of the book. However, she is stuck taking care of the family Saint Bernard who is chained to a dog house out back. Nobody is bugging Charlotte to take care of the dog, she just can't stand to see Killer as her father calls him or Beauregard as Charlotte calls him left without food or water or attention, so she fills the bowls, scratches the tummy and scoops the poop.

Why does the family have a dog that can't be in the house and nobody seems to want? It's because Charlotte's father can't pass up a good deal, whether it's a yard sale, a cheap broken down used car, or a purebred Saint Bernard, if he can get it cheap, he'll do it and not think of the consequences. His purchases keep him occupied and interested until the next good deal comes along and then they are forgotten. He claims to still love the dog and doesn't want to get rid of him, but he doesn't want to take care of him either, so Charlotte with the big heart steps in.

Why doesn't the family share the responsibility of the dog? Everyone has their own reasons, dad is distracted, older sister Agnes, a true teen queen, wants nothing to do with the drool and Mom is suffering from postpartum depression after the birth of baby brother Justin Lee. Mom also said from the beginning she didn't want the dog and wouldn't do anything to help with it, so Charlotte, who can't stand to see the gentle giant Beauregard suffer, tends to his needs.

What's a girl to do? Charlotte sets out to rid herself of Beauregard with several plans, the first is to make friends with the new girl, Grace, who lives in the biggest house in town with the hopes that she can talk Grace's family into adopting Beauregard. When that fails Charlotte takes drastic measures and drops the big dog off at an animal shelter claiming she found him running loose. When Beauregard is brought back by her father, Charlotte talks her dad into selling the dog through an ad in the newspaper, but when some scary characters begin to inquire about the dog, Charlotte offers to buy the dog herself so that she can turn him over to a Saint Bernard Rescue organization.

What can a 12 year old do to earn $400 to buy a Saint Bernard? Charlotte tries all sorts of ways to earn money and sort of falls into a job helping 83 year old stroke victim Petunia. At first Charlotte is nervous about being around Petunia who is very independent and doesn't really feel the need for help, but as time goes on the two find things to talk about, and Charlotte introduces Petunia to her friends Luann and Grace and the four play euchre every Friday after school. Needless to say, Charlotte earns the money and buys the dog and the ending of the book is very well done, not hokey and not at all what I predicted, more realistic.

Marlane Kennedy has a way with characters. Each person in this book has a role and each one plays it well. I love the way she developed the father as a guy who is loving and dedicated to his family, but can't pass up a good deal. The author gave such strength and independence to a frail 83 year old stroke victim and set Petunia up a role model for the 12 year olds who play cards with her on Friday. She created Charlotte as almost the voice of reason in her family, she sees a a problem and explores realistic ways to fix it.

I like this book a lot and just like Pumpkin Queen, I don't think it will be on the shelves very long.
Posted by Bill at 9:03 AM

Email ThisBlogThis!Share to TwitterShare to FacebookShare to Pinterest
Labels: dogs, Marlane Kennedy, Me and the Pumpkin Queen