Another Book Fair Find: Falling In 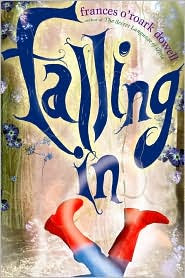 I took advantage of a snow day today to read another book from the book fair shelves. If we don't get back to school tomorrow, I may not have much of a chance to talk about it with the kids!

Last Wednesday was conference night and the book fair was open. One of my fifth grade students, I'll call her Madeline, called me over and asked if a book called Falling In was an Alice in Wonderland take off. I told her I didn't know and hadn't even seen the book before she pointed it out to me. Two things immediately caught my eye, the cool cover and the fact that the author was Frances O'Roark Dowell who wrote Shooting the Moon and the Phineas Macguire series, both favorites of mine. Madeline and I read the book flap together and were both intrigued, so I took a copy home for a read.

Before reading it I looked around on the internet for some info, but since it's a 2010 copyright, I didn't find much. I read it quickly because just like the nurse's closet pulls Isabelle Bean into a different world, Frances O'Roark Dowell pulled me into the story.

Isabelle knows there is something different about her, but she can't put her finger on it. She has difficulty making friends and when she does, the "cool" girls lure them away so Isabelle is left friendless until she just gives up on making friends. She is a bit of an unusual dresser, preferring trips to the thrift stores to trips to the mall, and she is the daughter of orphans, so she has no living relatives other than her mom, and her dad who left when she was 3.

Isabelle is haunted by a buzzing noise that she swears is coming from the floor of her classroom and is easily distracted. This leads to many trips to the principal's office and it is one of these trips that she attempts to help a classmate in the nurse's office. When she follows a mouse into the closet, Isabelle "falls in."

At the bottom she finds herself in a bit of a fairy tale land where all of the children fear a witch who threatens to eat them. The children of this place travel from camp to camp, avoiding the towns that are "in season" for the witch. When Isabelle meets up with them they immediately think she is the witch, eventually figuring out that doesn't make much sense since she is about their age and the witch has been around for as long as they can remember.

As she begins down the path to the nearest children's camp, Isabelle decides she would rather look for the witch and on the way meets Hen, the oldest child of a family who has been given the job of getting all of her younger brothers and sisters safely into camp. Unfortunately, they have become separated and now Hen has to find them. As the two of them head down the trail together, they are taken in by a kindly woman who is very good at finding healing herbs and roots which she leaves for the villagers depending on their need in exchange for food, and other items she needs. Isabelle senses something special about the woman, Grete and discoveries are made about family, magic and stories that aren't quite true. I don't want to ruin any part of the story here, but it's a good one with lessons about tolerance and misjudging people.

The characters in this book are very well written and Frances O'Roark Dowell blends humor with tender moments and fairy tale qualities in a way the keep the reader going. I'll be recommending this one to all of my fourth and fifth graders. It was a great way to "fall in" to the books of 2010.
Posted by Bill at 6:57 PM