The Girl Who Could Fly Discovered at the Bookfair 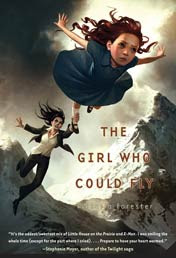 It's book fair week...two weeks at school and the library is filled with Scholastic book shelves. It never fails that I find something to read that I've never heard of before. The discovered books come with mixed results, but this week I found The Girl Who Could Fly by Victoria Forester on the shelf. It looked interesting so I gave it a read and was pleasantly surprised.

Piper McCloud is the only child of a farm couple who are very old fashioned and don't believe in anything that is unusual. Everything has a purpose and everything needs to stick to that purpose. When Piper rolls off of the changing table and doesn't hit the floor, hovering just above it, her parents are shocked and frightened. They do whatever it takes to keep Piper "grounded" including home schooling so she doesn't accidentally fly at school.

As Piper grows older she feels an "itch that she just can't scratch" like something's missing. She begins exploring and leaps of the roof and finds what she's been missing. Once she discovers her special talent, she begins perfecting it in the back field in private, away from her parents, neighbors and small town busy bodies.

When the family attends a church picnic on the Fourth of July, Piper has hopes of making friends, something she has longed for her entire life. However, the busy bodies begin to gossip about the "unusual" child and it ruins any chance she has of making friends. When teams are chosen for a baseball game, Piper is chosen last and sent to the outfield. Having never played baseball before she fails miserably and is kicked off the team by the captain. As she is leaving the field a ball is hit and Piper, determined to show people she can play baseball leaves the ground and flies to make a spectacular catch. Of course the fans and her parents are stunned and they rush her home.

What happens next is a whirlwind of excitement. News media, gossiping neighbors, mean kids, mysterious voices and finally she is taken away to I.N.S.A.N.E. a special school for kids with extraordinary abilities by its director Dr. Hellion...and then the action really begins. Piper meets up with a band of students with special abilities like telekinesis, X-ray vision, super strength, super intelligence just to name a few. It's this part of the story that really keeps the reader in the book. There are a number of plot twists that leave the reader questioning who are the good guys and who are the bad guys. Victoria Forester keeps the reader guessing until the end and includes some exciting, edge of your seat adventures with this band of special kids.

I liked the book a lot until the end. While the ending was ok, it seemed a bit quick to me. I have been recommending it to all of my fifth graders and some good fourth grade readers. There are some parts that border on weird, which make the story good, but may be disturbing to some readers.

I love it when I find something unexpected at the book fair!

Other Reviews:
Becky's Book Reviews
Book Nut
Best Book I Have Not Read
Posted by Bill at 5:50 PM