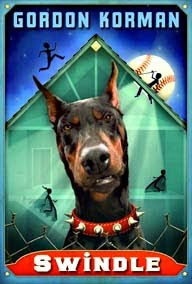 One of my very first posts was a review of Swindle by Gordon Korman. I loved it and it appears that a lot of our readers did too. The kids are back in Zoobreak and it's every bit as good as the first.

The books are kind of like Ocean's 11 done kid style. A group of kids, all with different skills play a role in a heist. In Swindle, it was a million dollar baseball card, in Zoobreak it's a stolen monkey.

Griffin Bing is known as "the man with the plan" and he is always upset that kids aren't treated fairly by adults. Because of this he comes up with elaborate plans that allow kids to take things into their own hands. In Zoobreak a monkey belonging to Savannah Drysdale, the team's animal expert, is missing. On a class trip to a floating zoo Savannah spots her monkey among the poorly treated animals and will not rest until Cleo is back home. Her dog Luthor, you may remember 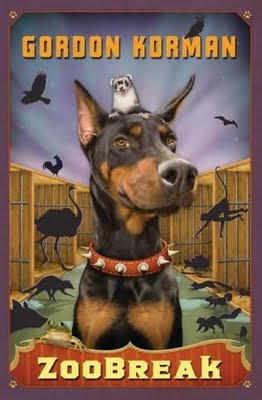 the doberman from Swindle, is also heartsick missing his best friend. When legal channels don't work, Griffin comes up with a plan to break into the boat and get the monkey back. At this point Gordon Korman does a very cool thing, he dedicates a chapter to the introduction of the team with what look like Post-Its that include name, specialty and objective within the plan. For example:

I really like this because many of the kids who read Swindle told me they had some difficulty keeping characters straight. With this chapter in place, they can always refer back to help keep at least the team members straight.

The kids successfully free Cleo the capuchin monkey but Savannah convinces them to also free all of the animals which leads to another problem, what to do with them when they get home. The middle part of the story, or Griffin's second plan, is humorous and could lead to some pretty good creative writing activities in the classroom. How would you hide a wild animal from your parents? Could be fun! This leads to the third plan which is another zoobreak, this time to put the animals in a local zoo without being caught.

Throughout both adventures there is the undercurrent of Griffin being separated from his best friend Ben Slovak who suffers from narcolepsy and is scheduled to go to a boarding school for kids suffering from the ailment.

Once again, Gordon Korman provides a fun, exciting read that will keep kids turning the pages to find out what happens next. This book will be featured at the book fair we have in October and I feel pretty confident that it will fly off of the shelves. As with Swindle, I think most 4th and all 5th graders can read and understand Zoobreak. I think some high level 3rd graders could as well.
Posted by Bill at 4:50 AM