Some of my fondest childhood memories are from family vacations. Growing up in a small Ohio town, a lot of my friends didn't do family vacations, but my parents always made sure there was a get away of some sort. Long trips to Florida or Wisconsin, short trips to the nearby state park for a week or weekend of camping , it didn't matter, I don't remember too many summers or spring breaks that my family didn't go somewhere. My parents were pretty good at mixing it up, we did Disney, various beaches, and historical sites like Gettysburg. Most of these trips were spent camping in our Wayfarer pop-up camper which cut the costs and provided some excitement like the time it rocked back and forth in what seemed like hurricane force winds in Florida just outside of Disney World. Many times friends were included in our trips, taken along and treated like part of the family. As parents the lovely Mrs. Prosser and I have been trying to give our children those types of memories as well. We have had sort of an informal list of things we would like to see as a family. With Meredith in her junior year, we know our time for this list is running out, and so, we checked another one off this week with four days in New York City. While none of us want to live there, we all agreed it was fun to visit, and I think we came away with some lasting memories 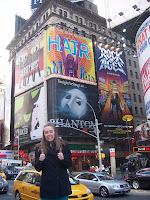 Seeing Phantom of the Opera on Broadway. The kids, especially Meredith have enjoyed the movie version, and since they are both involved in the drama programs at their schools, third row seats were a treat. We also took in Shrek! The Musical, Steven's choice, which was EXTREMELY funny and entertaining, I highly recommend it to anyone going to NYC. 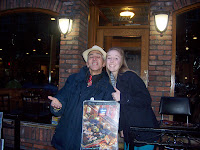 t by a charming man singing That's Amore and offering free sangria to Kathy and me. 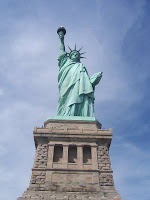 The Statue of Liberty. 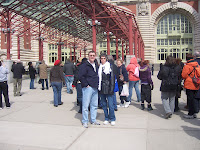 My two great kids getting along, which, as they get older, happens more and more. They actually seem to enjoy each other's company and laugh together often, it makes my heart smile! 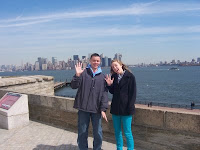 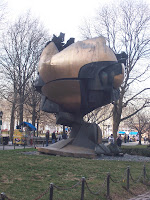 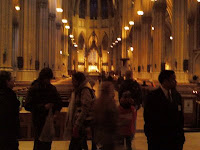 Being inspired by a beautiful cathedral and saddened by a sculpture damaged by terrorists.


...and having a laugh at Dad's expense when he had a hissy fit because he needed coffee and couldn't find a Starbucks soon enough! 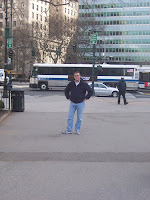 Thanks for indulging me on this sort of personal post, sort of unusual for me, but it was a great week and I wanted to share it with you. Monday I'll return to school for the sprint to the finish and even though it wasn't a relaxing four days, it was energizing and awesome to reconnect with my family.
Posted by Bill at 9:46 PM