How you write a mystery with students (James Preller style):

1) You encourage the process of brainstorming, and you follow through with the concept by respecting and honorin 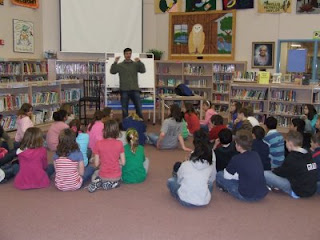 g all ideas (no matter how silly they might be).

2) You stand in front of the group with chart paper and a marker to capture the group’s thinking because those thoughts are important for the whole group.

3) You ask the students what every mystery contains, and they tell you a CRIME. You celebrate that answer, write it on the chart, and then seek ideas for what possible crimes might have occurred at this elementary school.

4) You listen (oh so patiently) as students suggest crimes: the principal was kidnapped, a computer was stolen, or a Smartboard was stolen. You explain (oh so patiently) that a crime written for elementary students is not likely to be quite so “large” in nature. Then, someone in the peanut gallery (ok, me) makes a suggestion that a University of Connecticut flag in one of the 5th grade rooms might get stolen. As the author, you take this suggestion and write it on the chart, but at the same time bring it back to the students by saying, “Oh my gosh. I’ve never heard a good idea from a teacher before!” Students think this is hysterical, and we’re back on track.

5) Now that we have a crime, it’s time to figure out who our SUSPECTS are. You immediately make it “safe” by saying we won’t be using anyone’s name that is in the roo 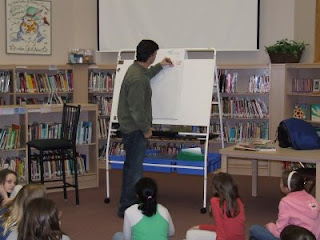 m. Then, you give some of the most valuable advice to them as authors for anything they write. You say we need to “show, not tell” what the character is like. If we say the character is a nerd, show a picture with words why that is so. If the suspect is a custodian who doesn’t like children, SHOW, not tell, how you know that. After we brainstorm information about 3 possible suspects, you chart the ideas, and we need to settle on one. But wait! We need to think about the next step first.

6) MOTIVE – what exactly is the motive for each of these possible suspects? You encourage us to do some rethinking about our suspects. Let’s look a little deeper and see what might make one of them take the UConn flag. Was it signed by a team that won the NCAA tournament, and therefore worth some money? Does the suspect possibly have a sick relative or pet, and they can’t pay the medical bills? You, as the author, help the students realize that things aren’t as black and white as they might seem on the surface. Did the suspect feel like he/she wa 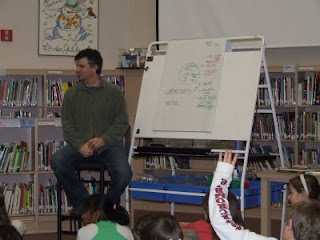 s slighted at some point by the owner of the flag? Is this some sort of retribution? With your encouragement, these are the types of motives the students are able to brainstorm as a group.

7) So many great motives. So you have the students look at another mystery element – OPPORTUNITY. We know our list of suspects, we have talked about some motives, but who had the opportunity to get to the flag? We discuss some possibilities together.

8) Time is running out, but you’ve taught the students yet another wonderful writer’s technique. You have modeled the way you think in bits and pieces all over the chart, circling and returning to certain sections over and over. You’ve shown them that brainstorming doesn’t have to be linear – line after line of possible supports for a topic – it can be cyclical. A writer can pick up a thread of thought or an idea at any time. Ideas can be messy, written all over a page, and revisited at the appropriate time.

9) Show the kids that you care about them and the writing piece you are creating together. Have that certain quality that lets students know you like them, and you’re happy to share this opportunity with them.


Both of us at Literate Lives are so grateful to James Preller (he will always be Jimmy to us) for how he enriched both students’ and teachers’ lives in the two days he spent at our school. We are so blessed to have met him, spent time with him, and learned from 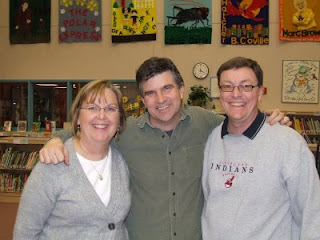 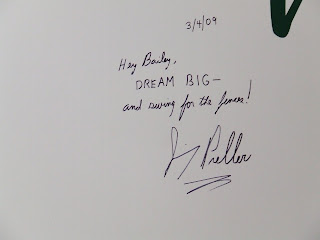