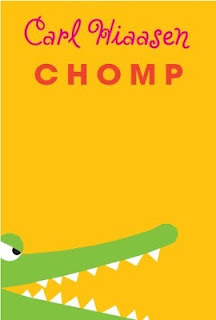 I just returned from Boston on Monday morning after taking a bus load of 41 students on a tour of the city and surrounding area.  The 13 hour bus ride provides plenty of time for reading and I was able to get through Chomp by Carl Hiaasen.

I'm a big fan of Hoot and Flush.  I've even read a couple of the adult books that Carl Hiaasen has written.  I love his style of humor and character development.  Even though his books for kids all have an environmental theme, they are all very different and feature very different, interesting characters.  He's clearly a smart writer creating smart books for kids who enjoy intrigue and have a sense of humor.

In Chomp, Wahoo Cray is the son of Mickey Cray, a well known wild animal wrangler in Florida.  However, ever since a frozen iguana fell on his head, Mickey hasn't been quite the same.  Suffering from a concussion, headaches and double vision, he has a hard time doing his job.  Wahoo has to pick up some of the slack and Mrs. Cray has no choice but to travel to China to earn money as an interpreter in order to pay the bills.

In her absence a survivalist reality show comes looking for some animals to feature in its next episode and the Crays have just what they are looking for.  The star of the show, Derek Badger, is a fraud and couldn't survive in the wild if his life depended on it, most of the show is staged with semi tame animals.  Every now and then Derek believes his own hype and decides he's going to use real wild animals in his show.  It almost always ends up in disaster.

Throw in a girl named Tuna who is abused by her father, her alcoholic father, the crew of the fakey survival show and a cast of Everglades air boat pilots and you have a book I had a hard time putting down.  Hiaasen is a master at cliff hangers and every chapter ends leaving the reader anxious to find out what happens next.

As an adult I get the underlying messages that Carl Hiaasen embeds in his humor and I think a lot of kids will too.  My list of really good 2012 books keeps growing.