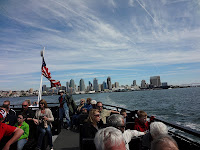 My colleague Maria from Teaching in the 21st Century and I were invited to present at the national conference for the National Center for Family Literacy in San Diego last week. Since we were on spring break we decided to go out a couple days early to check out the city and have some fun.

We left the warm March climate of central Ohio, seriously it was 80 degrees when we left, and flew into the cool climes of San Diego, low 60s. Who would have thought it! On our arrival we walked along the San Diego harbor and admired the many boats docked there, planned our days of fun before the conference began and enjoyed some really great food.

Highlights included a whale watch, we saw three gray whales swimming, several dolphins and a whole lot of seals. We also got sunburned because we weren't anticipating the sky clearing and a beautiful sunny afternoon. 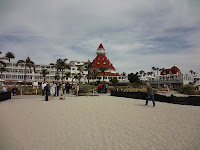 ened in 1888. As we strolled the corridors you could just sense the history and picture Bing Crosby, Frank Sinatra or Marilyn Monroe enjoying this classic hotel back in the day. In fact, the movie Some Like it Hot was filmed on location at the Coronado and photos of Marilyn Monroe are on display in the history hall.

Back on the mainland we walked past the Midway, a gigantic aircraft carrier permanently located in San Diego Harbor and visited a memorial to Bob Hope and all he did to entertain our troops. As you walk into the site, you can hear a recording of Mr. Hope giving o 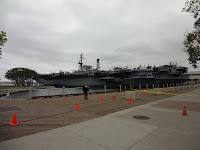 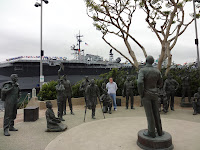 is famous monologues in his one of a kind style. It was very moving and the three of us, Maria, her husband Tom and I all reminisced about watching those TV specials as kids. I'm not sure today's kid can relate to all of that and I think they're really missing out on something important. 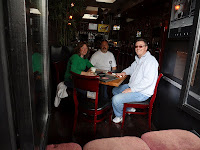 one day we visited the Gaslight district, full of restaurants and pubs where w 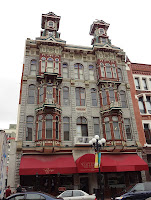 e enjoyed one of the best burgers I've ever eaten at Nicky Rottens and saw Wyatt Earpps' place on 5th Avenue. We took the train to Old Town to see what San Diego looked like in the beginning and enjoyed some delicious Mexican food.

For two days we rode the city buses and trains everywhere and stuffed a lot of touring into a short time. On Sunday the conference started and Maria and I had to go to work. I'll share more about that tomorrow.
Posted by Bill at 2:14 AM