Before You Go: A New Venture for James Preller 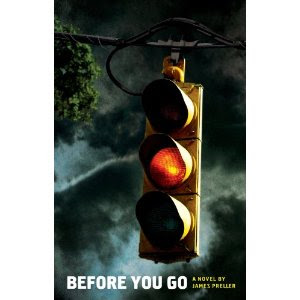 James Preller is a friend of Literate Lives. He is one of the first authors to make contact with us, and Karen and I felt like we had really made it when a real author commented on something written on our blog. He was the first author I hosted in the library when I switched jobs and our time with him was a huge success. This past weekend I got to spend some more time with him serving as his official host at the Dublin Lit Conference and I enjoyed every minute of it, hopefully he did too.

Before coming to the conference James sent me an ARC of his new YA title Before You Go. He and I have something in common on this novel, it's his first journey into the world of young adult fiction, and it's my first YA review. I'm saying that as something of a disclaimer, I don't claim to be an expert in this genre, and I don't really have anything to compare to Before You Go. I also don't expect to review too many other YA selections since they don't fit in our elementary library. That being said, here goes.

The book opens with a car wreck. Four people in a car on a dark night on a lonely road. One of them is killed, but the reader doesn't know the identity. The rest of the story flashes back to shortly, several weeks before the accident and goes through the life of some typical Long Island teenagers.

The main character, Jude, is working at a refreshment stand on Jones Beach the summer between his junior and senior years. Jude has never gotten over the death of his little sister when he was supposed to be watching her seven years ago, when he was only nine. Characters move in and out of the story, his best friend Corey, his co-worker Roberto, his first love Becka, his high school buddies Vinnie "The Italian Stallion" Puche and Lee.

The characters move in and out interacting with each other in very believable ways, always making the reader which one is the victim of the accident. I changed my mind too many times to count and it really kept me reading to find out. The characters are real, and as a dad to a teen age son, the relationships between the boys is spot on! It's obvious that James has spent time with teen age boys because the conversations and insults exchanged are thing I've heard my son and his friends say to one another. I really thing boys are going to be able to read this book and find themselves in at least one of the characters along the way.

The story is well written and again James Preller chooses word for maximum effect. As in his books for younger readers, Bystander and Six Innings the characters are strong and developed and easy to relate to. His words bring the reader into the story and create feelings that left me thinking about this book for a long time.

As I said, this is not an elementary book, it is written for older students, so I won't be purchasing it for my library, but as a YA selection it's strong.
Posted by Bill at 6:28 PM

Email ThisBlogThis!Share to TwitterShare to FacebookShare to Pinterest
Labels: James Preller, YA