The Cheshire Cheese Cat: A Dickens of a Tale 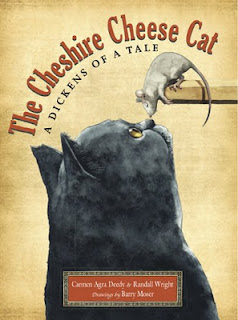 I found this title on one of the many Newbery prediction lists I've been looking over and just liked the title. After reading it, I understand why some feel it may be in the running for some prestigious awards in January. The Cheshire Cheese Cat: A Dickens of a Tale by Carmen Agra Deedy and Randall Wright is quite the Olde English adventure.

Based in Dickens era England, alley cat Skilley decides he is tired of life in the mean streets of London and decides to become a mouser at Ye 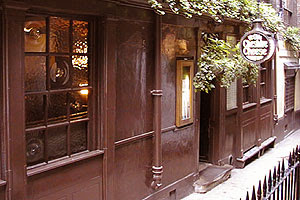 Olde Cheshire Cheese, a London tavern famous for it's delicious cheese and for being over run by mice. The problem is, Skilley has a secret that isn't revealed until well into the story, and won't be revealed here, I hate spoilers! On one of his first days on the job he meets Pip, an intelligent little mouse who quickly figures out Skilley's secret. The two strike a win-win bargain and the tale is on.

Skilley and Pip encounter lots of colorful characters, many named for Dickens characters, as they go about protecting a secret even bigger than Skilley's. The authors do a marvelous job of creating the characters giving them life through their personality traits and quirks. The heroes are likable even with their faults and the villains, Pinch the bad alley cat, force the reader to dislike them. They are all used to create the feel of a Dickens classic that is written at a level for elementary readers. However, there are enough levels to this book that it will appeal to older readers too.

Throughout the story illustrator Barry Moser's drawings highlight important happenings making it even more appealing to younger readers. This was a quick read and would make for a really fun read aloud in the classroom.

Other Reviews:
Fuse #8
There's a Book
Twenty by Jenny
Posted by Bill at 4:57 PM