Mr. President Goes to School is What It's All About in THE PIT! 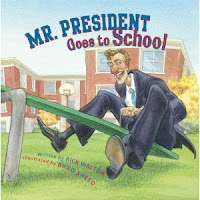 I know this book would have been better in February, for President's Day but I was reading this year' Caldecott, A Sick Day for Amos McGee at the time and sort of forgot how much I liked this story. Anyway, a week or so ago I found it on the shelf instead of the new book rack and remembered how much I like Mr. President Goes to School by Rick Walton and illustrated by Brad Sneed.

When the stresses of the most difficult job in the world begin to get Mr. President down, he puts on a disguise and returns to school. His teacher greets him at the door and Mr. President learns how to solve the world's problems, kindergarten style. He finger paints, plays with friends at recess, builds an imaginary castle, eats milk and cookies and finally, most importantly of all, he does the Hokey Pokey and remembers "that's what it's all about!"

He returns to the White House where the troubles haven't gone away, but now he has a new strategy for making peace between the leaders of Bulrovia and Snortburg, it's the old sticks and stones issue you know. Mr. President employs the tactics used by super teacher Mrs. Appletree and world peace is restored.

I'm thinking of offering the services of kindergarten teachers everywhere to solve the world's conflicts using a blend of song, finger paints, nurturing, napping and dancing. I think we'll call it Hokey Poke Diplomacy because after all, that's what it's all about!

Mary Lee reviewed it at A Year of Reading.
Posted by Bill at 4:54 PM