Some Tech Stuff for the Summer

I finally took the plunge into Twitter, Franki has been bugging me for about a year, maybe more, to get hooked. I kept putting it off because I wasn't sure why I needed to join. Truthfully, I still haven't figured that out, but after talking with Karen, I learned that was one thing that took place at the last tech discussion. Everyone who didn't have a Twitter account, now does. I didn't want to be left out, so here I am. If you have any suggestions for things I should do with this Twitter thang, let me know. Right now I'm mostly just lurking and have only tweeted on my Twitter once. That was the new thing.

The old thing I practiced was the book mosaic idea I came up with last summer. Basically the idea is to put together a collection of 9 pictures that represent a book in some way. I've done them for The Small Adventures of Popeye and Elvis, Savvy, and Make Way for Ducklings. I also created one for a family vacation. I hadn't done one in a while so yesterday I sat down and created one for Countdown, my first pick for some Newbery attention this year. 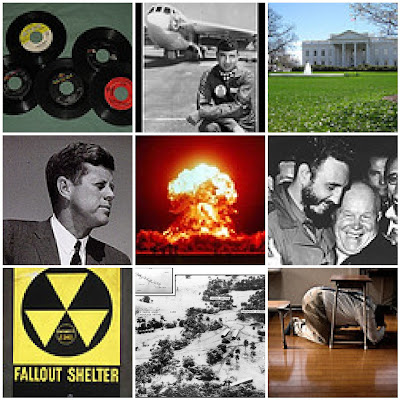