Second Justin Case Story Just as Fun as the First 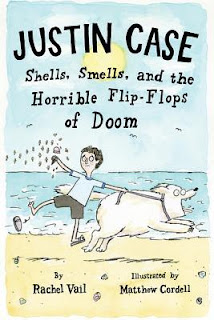 As I mentioned in my last post from a couple of weeks ago, I was in Dallas for the Junior National Volleyball Tournament.  The boys did well, 19th over all and it gave me lots of time to read.  One of the titles was Justin Case: Shells, Smells and the Horrible Flip-Flops of Doom by Rachel Vail.  I was a big fan of the first Justin Case book, School, Drool and Other Daily Disasters which Karen reviewed here and was excited to find volume 2 on my library's shelf of new stuff.

For those of you who aren't familiar with Justin, he's a worry wart of a kid, always nervous and trying to figure out the social scene of elementary school.  In Shells, Smells, and the Horrible Flip-Flops of Doom, Justin goes against his better judgement and decides to attend Camp Goldenbrook.  It's camp where Justin thinks he will learn to be more of a "rough and tumble kid" instead of such a worrier.  Instead of doing experiments and scientific investigations every day, Justin will be playing dodge ball and learning to swim, two things that are definitely out of his comfort zone. 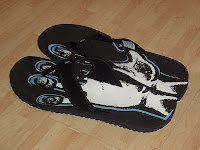 In order to get ready for camp, Justin must come to grips with changing clothes in a locker room in front of other people.  Other campers teach him the trick of holding his towel in his teeth so nobody can see anything.  He must learn to deal with having no real friends at camp.  He knows several sporty kids who attend Camp Goldenbrook but they're not kids he would normally spend time with.  Along with many other hurdles, including a bully of a counselor, a mean kid who takes advantage of the less athletic and eating in a place the call The Mess where they serve hockey pucks and bug juice, Justin has to get used to the "flip-flops of doom."  Actually he just needs to get used to that little thing that goes between your toes and rubs your skin raw. I feel his pain, I never liked that little thing!

In the end, Justin discovers a lot about how strong he is and stands up for himself.  At some point in the story, I thought I had it all figured out, but Justin not only surprised me, he surprised himself and really expands his horizons.  I know kids like Justin who want to try new things and move beyond where they are, I think this book might help them figure a few things out.  I'll definitely be recommending this book to my 3rd graders in the fall.  Fans of Alvin Ho will enjoy Justin Case.
Posted by Bill at 9:00 AM