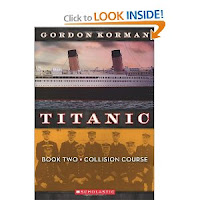 Back in January, I was lucky enough to get my hands on an ARC of a new series Gordon Korman was launching about the Titanic, titled aptly enough, Titanic. It was to be a trilogy of books. Since that time, Book One, Unsinkable, came out in May. Recently Book Two, Collision Course, arrived in bookstores on August 1, and Amazon is telling me that the final book, S.O.S., came out this past week on September 1.

While I have not gotten the third book yet, the second, Collision Course, picked up with its non-stop action right where the first book left off. We have Irish thugs chasing one of our main characters who also happens to be a stowaway on the Titanic, we have children becoming friends across socioeconomic lines, we have Jack the Ripper possibly onboard and trying to get back to what he likes to do best, we have arrogant captains trying to rush the Titanic to New York, and yes, we have the big ship hitting a huge iceberg.

Like I shared in my first review, this is a book that refuses to let you put it down, even though historically you know what is in store for these travelers. I will be fascinated to read the final book in the trilogy, as I am so invested in some of these children characters, I can't bear that they will suffer the plight that so many others did. My questions heading into the final book will be if Korman keeps it realistic, or if he tries to make it as happily ever after as a disaster can be.

Because I don't want to give much away, I won't review that final book. But I will be introducing this series to my class this Wednesday in a tub with nonfiction books about the Titanic as well. I predict that these books will have long lines of people waiting to read them!! Knowing that, I guess I will need to purchase the final book asap!!
Posted by Karen at 3:16 AM