My Parental Pride is Showing

The first came over Memorial Day weekend. Steven is part of the Hilliard Darby Symphonic Choir, a select choir at his high school. The group was chosen to join several other choirs from around the country to form a 300 voice choir that would perform with the U. S. Army Symphony at the Kennedy Center in Washington, D. C. I won't lie, as the trip grew closer there was some grumbling in my house about the cost, the timing was bad, we were missing graduation parties for some very dear friends, and Steven wasn't getting to play in the state champ 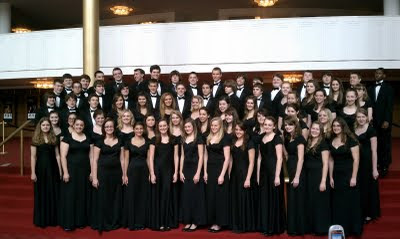 ionships for volleyball. We weren't sure the trip was going to be worth the sacrifices we were making as a family. However, it was paid for and Steven had committed, so there really wasn't a choice, we were going to D. C. over Memorial Day Weekend.

We toured the city and enjoyed the company of some friends whose daughter was also singing and on Sunday made our way to the Kennedy Center. The performance hall where the kids sang, was amazing, just walking in we felt we were going to be part of something special. When the concert began the host of the event was a Congressional Medal of Honor winner and later the guest conductor was a D-Day survivor. Our son Steven has taken an interest in WW II, thanks to the movie Saving Private Ryan, and was completely impressed and excited to share the stage with these American heroes. As the choir sang and the symphony played, there was not a dry eye in the house. When the groups launched into a medley of the Armed Service theme songs, and audience members stood as their branch was saluted, it hit me why we did this, and how important it was for Steven to be a part of it, that hour in the Kennedy Center was one of the most moving things I have ever been a part of. After the concert we met the kids in the hallway and I could tell from the look on Steven's face that we had made the right choice, he was in sort of a daze and when I hugged him the first thing he said was, "That was awesome!" I couldn't have said it better myself!

The second experience just happened last weekend, over the 4th of July. We traveled with Steven's volleyball team to play in the USA Volleyball Junior Boys National Tournament in Minneapolis. Our kids are a high school team that really have only played together for about 3 months. Two of the boys have only played with our team for the last month to prepare for this event. They would be playing against some of the best talent in the country, teams that have played together nearly year round for several years. Many of the teams were from California and Puerto Rico, two places where the kids 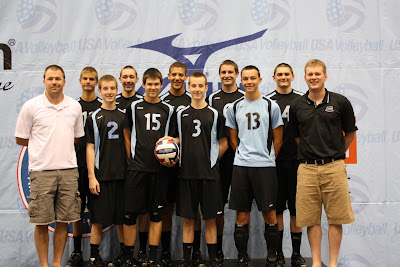 grow up on the sport, that's not the case in Ohio, most of our kids don't pick up the game until middle school, so strike up another disadvantage for our boys! As play began our Darby Panthers realized they weren't in Central Ohio anymore! In Central Ohio, they dominate, in Minneapolis, they were scrappy and hung in with some amazing teams, never quitting and always playing hard.

On the afternoon on the second day, our boys were placed in a pool with a San Gabriel, CA team who started the tournament ranked 5th and would end the tournament in 4th
place. It was an incredible match! In order to win a match a team has to win 2 out of 3 games our boys won the second game and only lost the third by a couple of points. It was so close! After the match the San Gabriel coach was so complimentary of our team and how athletic our boys are, but my favorite comment (proud parent bragging alert) was when he singled our Steven out as a "stud" at his position! Our boys won their next match against yet another California team in what I have to consider one of the most exciting volleyball events I have been a part of.

It was obvious after losing such a tough match the kids were having a tough time getting excited and up for the last match of the day, so the parents took it upon themselves to get them fired up. We weren't the largest cheering section in the arena, but for that match, we were the loudest! We chanted D-A-R-B-Y until we didn't have any voices left, moms were running up and down the crowd high fiving everyone who had a hand out, moms were even chest bumping and our boys responded. As the match went on, the crowd around our court began growing and soon the Darby Panthers had a HUGE cheering section, including our opponents from San Gabriel! The boys in red and their parents were cheering just as loud as we were and the Darby Panthers quickly became the talk of the town, for at least that day! What a moment! When the boys walked off the court victorious, words cannot describe their smiles and our pride. Later, while talking to one of the parents from San Gabriel, we learned that they were so impressed with our kids, not only because of how they play the game, but because of their obvious camaraderie and friendship. It was clear that the boys on this team enjoy being together. As a parent, that's why we want our kids involved in these things, friendship, working together, cooperation, sportsmanship, perseverance, all things that will take them places in this world. Our boys finished 25th out of 49 teams, moving up 15 spots from their original ranking, and even though Steven was disappointed that they didn't finish higher, the lovely Mrs. Prosser and I know he and his team mates came out with something more than medals.
Posted by Bill at 7:17 AM

Email ThisBlogThis!Share to TwitterShare to FacebookShare to Pinterest
Labels: family